My first safari in Namibia: traveling with Stefano!

It is said that the first time is never forgotten! And that long-awaited dream was about to come true.

It was March 2018 when I had the good fortune to meet Luca Bogarelli, now a dear friend and teacher with whom in September of the following year I shot down my first stag on the island of Bute (but that’s another story …).

With Luca we planned the safari for the month of August and, among the different destinations available to Montefeltro, we opted for the Bergzicht Game Lodge in Namibia. 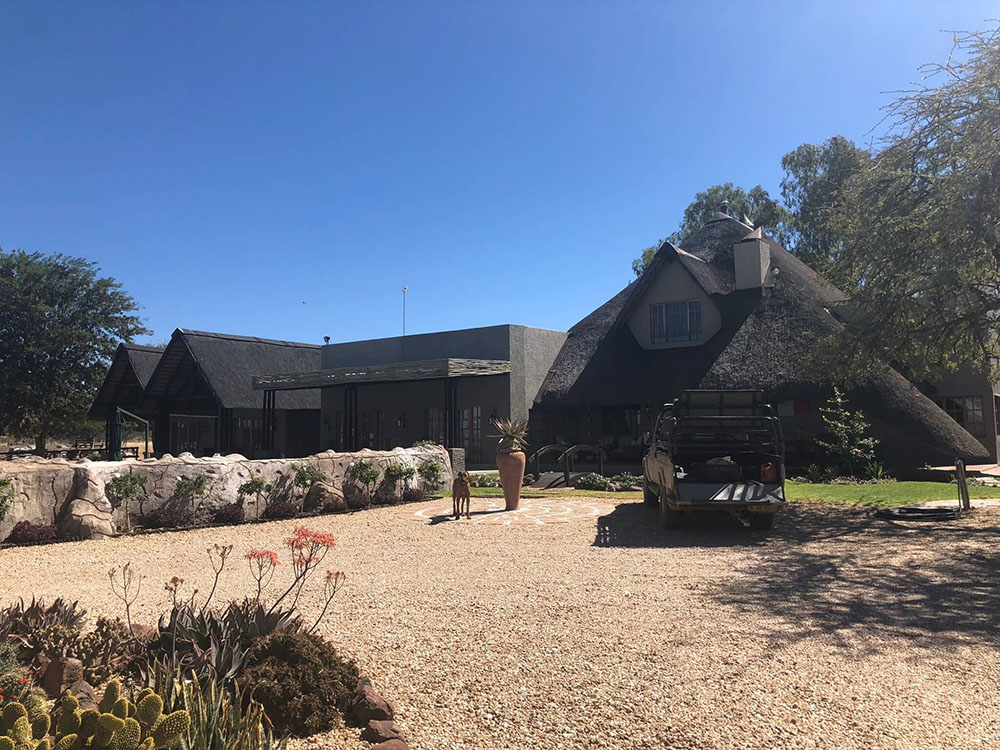 I left Milan Malpensa airport, making a stopover in Doha, to then arrive at Hosea Kutako International Airport in Windhoek where I found Hannes and Geraldine, husband and wife, holders of the Bergzicht waiting for me.

A couple of hours on the road separated us from the magnificent field where I was greeted by the whole team with a fervent and friendly welcome.

In the afternoon we went to check thesetting of my Weatherby rifle in 300 Wby caliber, which I had brought for the safari, and it turned out to be perfect. Everything was ready! 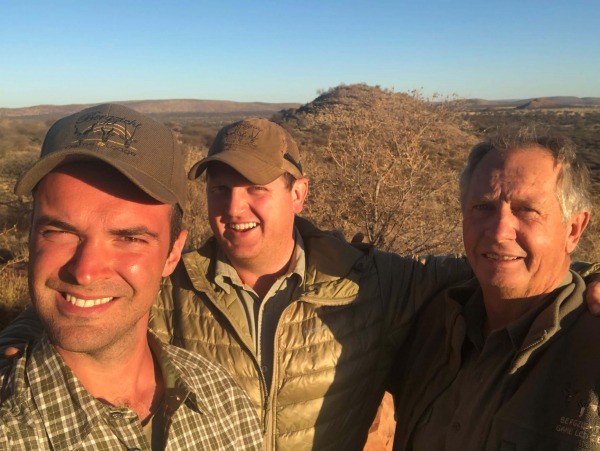 The following day, the first of five days of hunting accompanied by Hannes and two expert trackers, started very well with the killing of a magnificent specimen of Orix and a beautiful Springbok.

The next day I hunted instead with Stephan, a young and experienced PH son-in-law of Hannes and Geraldine.

We picked up a nice Impala in the morning.

We then tried to approach a male of Blesbok who, despite our constant changes of direction to keep the wind in favor and the crawling on stomach on the ground among the low vegetation with the deadly thorns that characterize the bush, sniffed us and did not allowed us to take the shot.

We tried a second approach, but it too failed.

We moved to a hill, so as to be able to better observe the area, and from that position we identified two Red Hartebeest; one young male and one adult.

We tried to get as close as possible but, when we reached about two hundred meters, the animals began to move.

Leaning well on the stick, I framed the older animal that was giving me its right side, I waited for it to stop, aimed at the shoulder and let the shot go.

The instant I pulled the trigger, the animal leapt, turned and replaced the shoulder with the thigh on the impact of the 180-grain Barnes TSX bullet.

Struck, but not to a death point, he ran and disappeared into the bush. 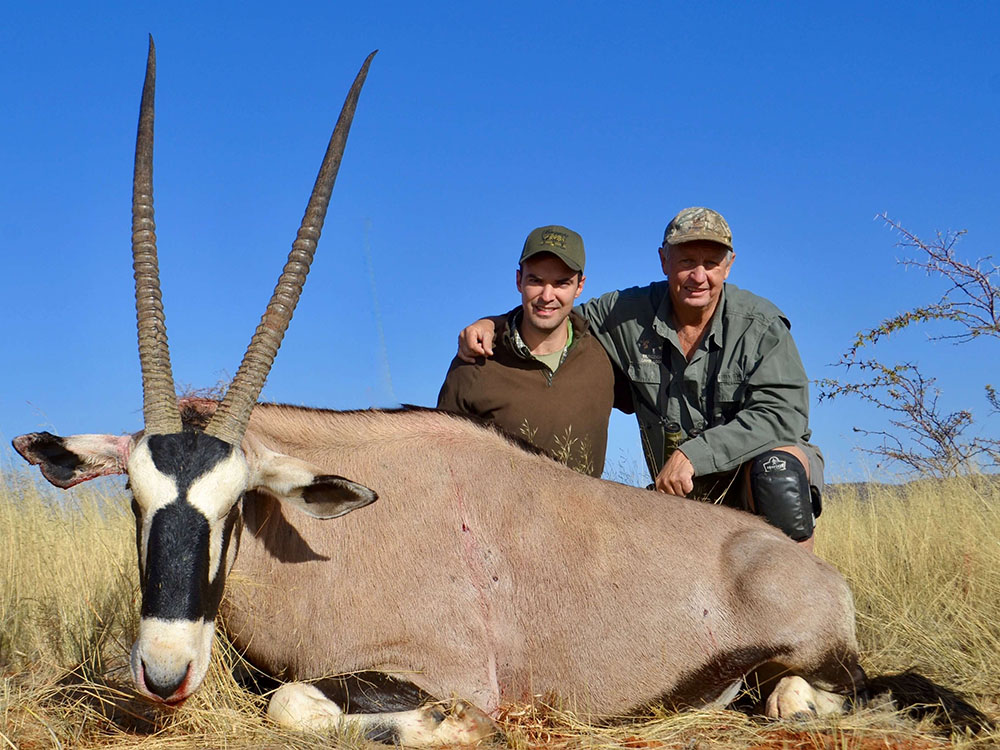 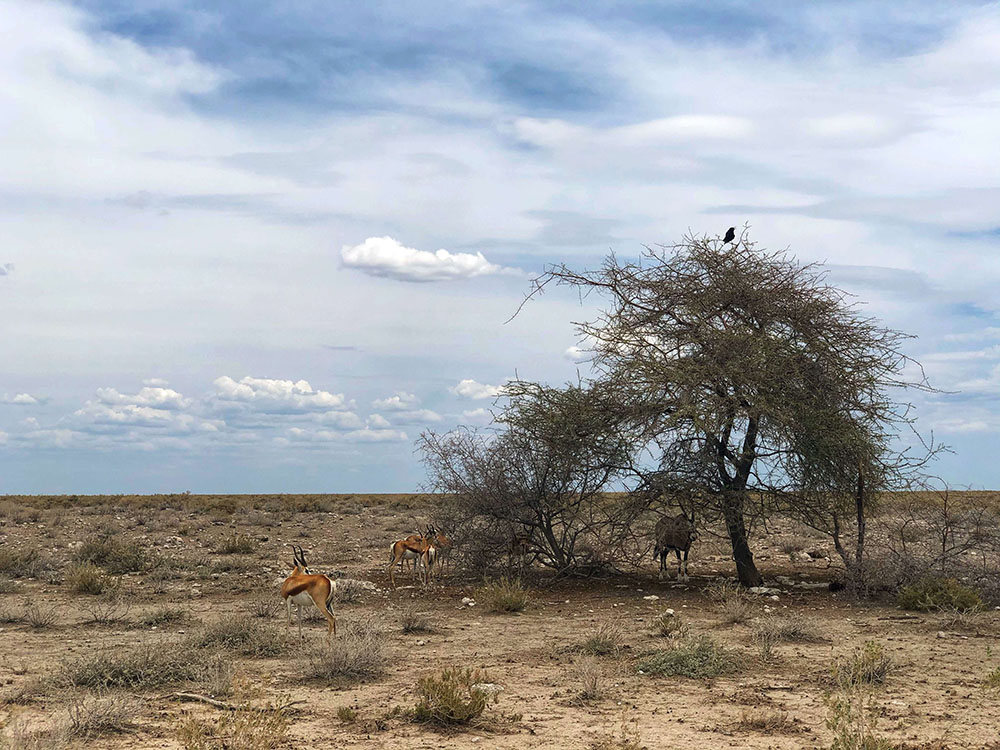 Stephan also confirmed to me that the animal had been hit and we waited a few minutes, wiggling very carefully towards the escape direction with the hope of catching a glimpse of it, before going to check.

Once on the spot we found a drop of blood that gave us the certainty of what happened.

We then relied on the skill and experience of the trackers thanks to whom, after more than a kilometer and a half of following almost imperceptible traces of blood and footprints in the sand, we were able to find the animal and conclude the action.

In the following days we gathered a Blesbock, a Blue Wildebeest and a Warthog. 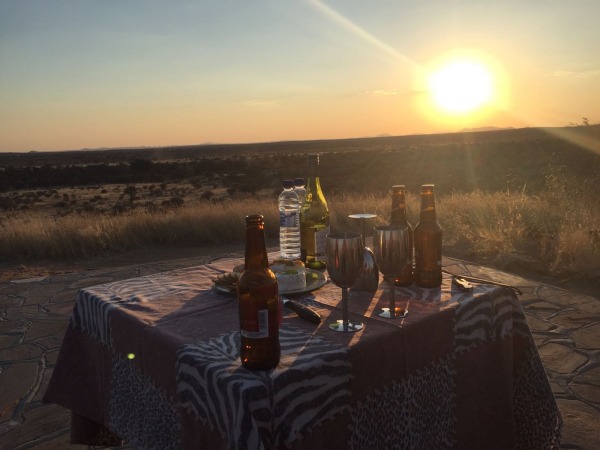 This is how my first safari came to an end…

The beauty of the landscapes and the fauna, the meeting of new friends, having tasted the meat of the hunted animals, the excellent service and competence of all the staff, the perfumes, the having shared moments and emotions that will remain forever engraved in the heart and in the memories…

This is Montefeltro! Thanks and see you next adventure!

We are ready to organize the safari of your dreams!