Hunting in Macedonia with a hunting dog

There is a place a few kilometers from Italy that is the paradise of hunting with pointing dogs.

And it is precisely in this place that the gentle hills populated by native gray partridges are contrasted by the immense mountains where the rock partridge reigns supreme.

Macedonia is, for the dog lovers hunter, that place where immersing oneself in the most pristine nature is daily normality and the work of one’s dog is enhanced by the beauty of the territories and the cunning game that populates them.

Several years ago, Enrico had the chance to know and observe this environment closely for the first time and, since then, he cannot do without going there hunting.

I lived magical moments, hunting partridges in the company of Sestri my English setter.

Since my first hunting license, I dreamed of hunting real, crafty, gray partridges but above all, I wanted to hunt with a dog handling properly the situation. It is true, that sacrifice and knowledge are needed, but when the puzzle comes together then it is an ecstasy of emotions. 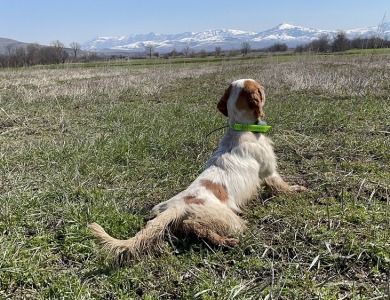 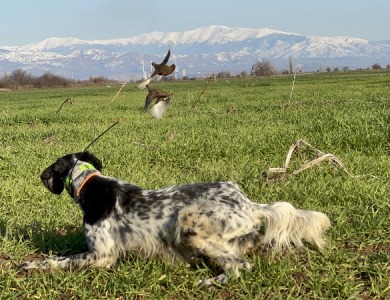 A hill near Bitola had always teased me, I had never hunted in that place, I watched it from afar every morning when I accompanied clients to the hunting ground.

One day I decided it was time to go scouting. Every so often, in accompanying customers I do this: I look for hidden corners where to take them and where to make the experience magical moments.

While I load Sestri on the van, an autumn drizzle begins, it seems more like a woodcock climate than a partridge one. A stiff wind caresses the hills and I immediately think of the skids and climbs of Sestri, of the adventure that awaits us.

Getting out of the van, it was enough to catch Sestri’s gaze to understand us. He was pounding to get out of the van to immerse himself in those grounds. I turn on the satellite, put it on Sestri, and unplug it. 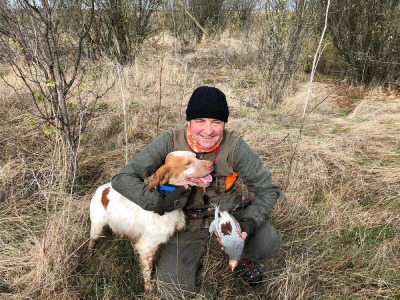 He starts like a cheetah up the hill, and disappears from my sight for 10 minutes.

Climbing up the ridge I enjoy the wind and the drops of water that hit my face: I can hardly keep my eyes open, but I try to understand where Sestri has ended up.

I go down the hill and see him at the bottom of the valley going up the other side, I crouch trying to avoid the gusts of wind, I look at him, his way of “working” the land and exploiting the wind.

My satisfaction is already at high levels, but it reaches its highest point when Sestri comes into effect and begins to skid.

A few meters are enough for him to fall into the statuary station and I hurry to get down to approach him.

The distance is about 300 meters but I have to circumvent an escarpment and cross a stream, it takes a few minutes before I manage to pass Sestri.

After reaching him, I stop to look at him: he is wet and trembling with tension, and I snap my fingers to guide him.

He begins to move with caution, while I think about the position of the dog.

His head is high, his gaze fixed, the stiff wind moves his fur and his gaze is turned towards a decline of the hill. 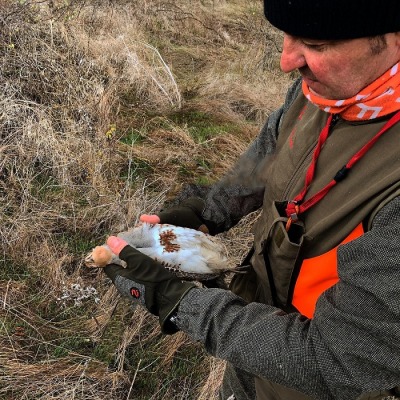 Accompanying that scene, which I will always carry in my heart, is only the sound of the wind.

The time has come: I get into position, close the rifle, and start moving forward slightly.

Sestri breaks the stop and goes up again 20 meters in front of me. The tall grass yellowed by time makes it almost disappear, so much so that I can only see his head starting to rotate towards me.

I understand that there are, closed a herd of partridges, now they are between me and him.

I take two steps to the right and by magic, a flight of 15 partridges fly off the ground, the sound of the flapping of wings almost frightens me, the singing of the brigade exalts me.

I turn around, hold the gun, and hit a male with the second shot. Sestri ready to retrieve, grants me his prey.

These are my emotions, this is the memory of that magical hunting season and of my first time in the hills of Bitola. It was just me, my dog and the beauty of the places we were in.

And here, admiring your dog’s work in searching for the wild animals par excellence in Macedonia, will make every day of your hunting unforgettable.